“It is morally wrong to sell horn if it does not work.”

The Chinese are the main consumers and they believe, or some believe, that it works. Western medicine is sceptical and has said so. There are thousands of different remedies that are sold all over the world that have no proven effectiveness and there are lots of products sold that are actually harmful. Nobody has suggested that horn is harmful. A placebo can have a powerful beneficial effect. Killing 1,000 rhino in 2013 was clearly wrong and if the killing can be reduced by trade then the world will be a better place, regardless of whether horn works or not and any comparatively minor sensitivities around that.

It may do. Some consumers may not buy horn now because it is illegal to do so. But the “Smart Trade” model of a monopoly selling to a cartel of Traditional Chinese Medicine (TCM) hospitals will be able to adjust the price of horn so as to bring the level of demand into balance with a sustainable level of supply. Also, Smart Trade is designed to reduce the appetite speculators now have for buying horn, an appetite that is based on the prospect of the value of horn increasing because of the declining numbers of rhino. Trade should lead to less speculation in horn which will reduce poaching.

Actual consumer demand is limited by high prices and is estimated at a total of 1,100 horn-sets p.a. South Africa can sustainably supply 1,300 horn-sets from stocks (400), natural deaths (400) and farmed horn (500). There are said to be a large number of “intenders” who would buy horn if the price was lower but that is the case with most products. (There is no intention in the model to reduce prices and “flood” the market with horn so as to reduce the poacher’s profit. Reducing the poacher’s profit would be good but flooding the market would be unsustainable and invite speculation. There are other ways of reducing the poacher’s profit.)

“More law enforcement is the solution.”

Law enforcement is essential but difficult over vast areas and it is expensive. Greatly increased expenditure has not been able to reduce the numbers poached. There are high rewards to poaching and the risks are low. Corruption undermines the process. There are budget constraints. On its own, law enforcement is not working and may never work.

“Demand reduction is the solution.”

Only about 0.1% of the Chinese population consume the entire supply of 1,100 horn-sets so a demand reduction strategy is going to have to persuade more than 99.9% of the population or it will not be effective.

“If South Africa sells horn, it will jeopardise rhino populations in other range states such as Namibia, India and Java.”

The intention of a Smart Trade is to satisfy demand with legal horn which should result in a reduced poaching threat for all rhino populations.

“The ivory auction in 2008 was said to have increased the amount of poaching of elephant.”

There are some 20,000 elephant being poached every year in Africa which would produce 100 tons of ivory at, say, 5 kg per elephant. Most of that goes to China. CITES (The Convention on International Trade in Endangered Species) has said that there is no evidence of the auction having increased or decreased poaching. 62 tons was sold to China and 46 tons to Japan. The 2008 auction was allowed by CITES on the basis that there would not be another sale for 9 years so the 62 tons sold to China was minimal and represents a fraction of Chinese demand for the 9 year period. By comparison, the proposed horn trade should satisfy the full annual demand at current high prices.

“Illegal horn will find its way on to the legal market.”

The proposed model has been structured to prevent that. There will be a clear legal channel and the only place to buy legal horn will be from the cartel of licensed TCM state hospitals. Keeping their retail licenses will depend upon their respecting a “Best Practice” set of rules and they will lose their licenses and a very profitable business if they trade in illegal horn.

Yes, but it will be much less profitable to the criminals than now and carry higher risks and the market for poached horn will be much smaller. Illegal goods typically trade at a 30% discount if there is a legal market. This relates to the risk of being caught and punished. In addition there will be the risk of buying fake or poisoned horn in the illegal market which will increase the discount to, say, 40%. The Chinese government, being invested in the legal trade, is likely to clamp down on the criminal trade. The expectation is that a legal trade will substantially reduce poaching levels.

“The trade proposal’s main aim is to enrich a few farmers and some corrupt individuals in government.”

Private ranchers own 25% of the rhino in South Africa and have a right to profit from any trade, proportionately. To the extent that they make profits on the trade they will pay taxes to the state in the normal way. The other 75% is owned by SANParks and the Provincial parks and 75% of the income from horn sales will go directly to those parks with no middlemen and no corruption possible.

“More data is needed before embarking on trade.”

It is not possible to collect data when there is no legal trade. The Smart Trade model is based on the De Beers Central Selling Organisation (CSO) which worked well for over 50 years. It is a tried and tested model. The CSO was closed because the competition authorities opposed a near monopoly selling to a

cartel. With both the rhino horn selling monopoly and the retail (TCM) cartel belonging to governments, competition authorities should have no interest in the horn trade.

CITES was established to regulate trade in endangered species. Unfortunately the organisation has become highly politicised, encouraged by donor agencies who influence votes, although they have no vote themselves. These agents, of which there are scores, are universally opposed to horn trade because, perhaps, a rhino crisis makes donor funding easy and the agents live off donor funds. But, are they the saviours they profess to be? The case for trade is compelling and if it is not accepted by CITES for rhino horn it is difficult to see in what circumstances and for which species trade will be acceptable.

The arguments against trade seem weak and contrived.

FOREWORD by Dr Peter Oberem – President of Wildlife Ranching South Africa (WRSA) “Those that fail to learn from history are doomed to repeat it,” 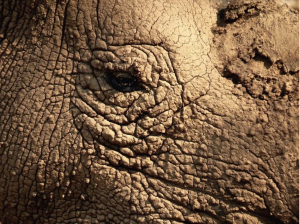