The early 1980s was a tough time to conserve wildlife outside national parks in Namibia, particularly in areas that were demarcated by the apartheid government as homelands. It was tough both politically and environmentally – the government of the day had little political will and no effective strategy to stop poaching in the area, while the people living there had just survived a severe drought. Wildlife in these areas had become a resource that was used by everyone and looked after by no one.

Garth Owen-Smith, Chris Eyre, Lukas Mbomboro and a small band of farsighted conservationists proposed a solution that seemed preposterous at the time: to work with the people living in these areas to reduce poaching. Even though some of the worst poachers were government officials, the authorities of the day viewed every rural African as part of the poaching problem. The idea to partner with African communities to conserve wildlife effectively pitted Garth and his team against the apartheid regime.

While met with scepticism even by his own donors, Garth established relationships with some equally farsighted traditional leaders who were as concerned about the rampant poaching as he was. In what we would call a “brainstorming session” today, but what Garth would call “drinking tea and smoking pipes together”, he and Joshua Kangombe (a sub-headman from Warmquelle) hit upon a solution. Garth records this conversation in his book An Arid Eden:

“[Joshua] believed that the hunting could only be stopped if the government stations many more people in the Kaokoveld [northern Kunene Region]. This was very unlikely to happen, I replied, and even if they did the poachers knew the bush much better than the school-educated men the [conservation authorities] employed. Joshua agreed: ‘The nature conservation officials are always in a hurry, and they just drive on the main roads. Everybody knows when they come here, so the poachers stay at home. When they go back to Khorixas they start hunting again.”

Having considered the problem for a bit longer over their puffing pipes and sweet tea, Garth and Joshua agreed that they needed local people who knew the land and their communities intimately to join them in their quest to stop poaching. Joshua suggested that if the people who were currently poaching had enough food to feed their families, they would stop doing it. Garth recognised the need for selecting respected members of the community who knew their surroundings as well as the poachers did, even if they had no formal education. Perhaps even some of the poachers could be convinced to join their side?

They created a basic sketch of how these people would work and what they would do. Critically, they had to be appointed by their own traditional leaders, but would be supported with rations and salaries by the non-governmental organisation that Garth worked for at the time. Because they were not government-appointed rangers, however, they were not armed and had no right to arrest suspected poachers. Instead, they would be the “eyes and ears” for their leaders and would alert Garth whenever they heard about poaching activities or came across evidence of poaching. With Chris Eyre, a rare government official at that time who shared their vision and could make arrests, this small group of six community members and their supporters proved to be a game-changer for conservation.

These community rangers came to be known as community game guards. Besides tracking down poachers, their job was to talk about conservation in their communities, collect environmental information, and report on any other wildlife-related news from their areas. Although they were illiterate when it came to pen and paper, they could read tracks on the ground like yesterday’s newspaper and reconstruct wildlife crime scenes from traces of evidence left in the bush. As well-connected and respected members of society, they often heard about suspicious activity through others in their villages.

Three key features of the original game guard system stand out, even among today’s anti-poaching efforts. First, several leaders like Joshua Kangombe and their councillors agreed to be a part of wildlife conservation on principle, for the sake of their own people and their cultural heritage. Second, the game guards were appointed by and therefore answerable to their own traditional leaders, so anyone caught poaching knew that these leaders disapproved. Third, when poachers were caught they were treated with civility and encouraged to tell their story of why and how they started poaching (when Garth was present, this often involved drinking a cup of tea with the suspect). While anti-poaching efforts in many other places in Africa involve extreme levels of distrust and violence, the community game guard idea showed that it is possible to build trust, diffuse violent situations and still stop poaching. Therein lies the key to this approach: the aim was to stop poaching, not merely catch poachers.

In An Arid Eden, Garth recounts several of the first successful arrests arising directly from the game guards’ information, including one involving a government official who thought he would never be caught. After just over a year of operation between July 1983 and September 1984, Garth reported:

“A total of fourteen cases of suspected illegal hunting were reported in Kaokoland and Damaraland [southern Kunene]. Eight of these cases were picked up by the community game guards (CGGs),” and “The majority of the cases uncovered by the CGGs would almost certainly not have been found by conventional anti-poaching patrols. It was only because the CGGs lived in the area that they were tipped off by the local people.” He further cited the game guards as playing a crucial role in creating support for conservation among their communities that would extend their work beyond anti-poaching to achieve broader conservation goals.

The latter part of this report from 1984 was particularly prescient, as the work of community game guards has indeed extended far beyond anti-poaching. Fast-forward to 2021 and we see community game guards as part of the much bigger community-based natural resource management programme in Namibia. As the new government paved the way to establish communal conservancies in the early- to mid-1990s, the game guards became conservancy employees. Today, they monitor wildlife populations, respond to human-wildlife conflict, and report on sightings of rare species and other events of interest using the Event Book system. Some game guards have taken on specialist roles as rhino and lion rangers to focus on the particular conservation needs of these species.

Community resource monitors expanded the community ranger team in the 1990s by focusing on conserving plant resources. The first resource monitors appointed in conservancies were women who knew their local plant resources (e.g. devil’s claw, hardwood trees, or Commiphora plants) and were involved in harvesting these products. This paved the way for a new kind of community-based organisation – the community forest. Similarly, fish guards (usually men) and fish monitors (women and men) prevent illegal fishing and monitor community fish resources, respectively, as part of community fisheries reserves. From a small band of six in the north-west, there are now 627 men and women who monitor and protect various natural resources on behalf of their communities.

Garth Owen-Smith played an important role in starting and initially expanding the conservancy programme, and even after retirement he maintained a keen interest in the overall programme. Although he passed away in early 2020, he lived to see the fulfilment of his 1984 prediction that community game guards would play an important role in broader conservation work in Namibia. The men and women who work at the frontlines of community-based conservation remained close to Garth’s heart – he would often visit those he knew whenever he was in their conservancies long after his official retirement.

There is therefore no better way to honour Garth’s memory and continue his life’s work than to highlight community rangers who show an outstanding commitment to their work. His partner Dr Margaret Jacobsohn has established the Grassroots Owen-Smith Community Ranger Awards (GOSCARs) as a way to commemorate Garth’s life and recognise the importance of community rangers to Namibian conservation. Using donations from many Namibian and international admirers of Garth’s work, the GOSCARs will present cash prizes and certificates to outstanding community rangers, their community-based organisations and traditional authorities (where applicable) each year.

Nominations are now open (forms available here) until the 1st of December 2021. Once all nominations have been received, the GOSCARs committee (chaired by Dr Jacobsohn) will check the information provided by visiting the nominees and their conservancies in the field and decide on the winners. The inaugural award ceremony will be held in April 2022 to remember Garth’s work and recognise the winners’ dedication to community-based conservation.

Garth’s vision of community game guards first reducing poaching and later becoming part of a broader community-based conservation movement has come to fruition. This success story will not continue to write itself, however. It will take new generations of people living in rural communities who make this vision part of their own life’s work. GOSCARs is one way to inspire these generations to maintain the momentum that started when two visionaries crossed the formidable racial barriers of the time to drink tea, puff on their pipes and imagine a better future together. 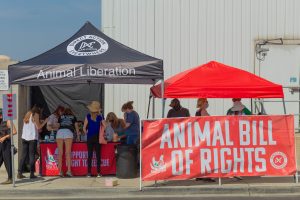 The inhumanity of the animal rights lobby

A People’s Manifesto For The Future Of Conservation

Indigenous, non-indigenous campaigners and experts who attended the world’s first Our Land Our Nature Congress released a manifesto calling for a total halt to the creation of new

Originally published on Ecology and Society. ABSTRACT Human-wildlife conflicts are a global problem, and are occurring in many countries where human and wildlife requirements overlap.