At the 10th meeting of the Conference of the Parties to the Convention on International Trade in Endangered Species of Wild Fauna and Flora (CITES), held in Harare, Zimbabwe from 9 to 20 June 1997, the status of the African elephant Loxodonta africana has been changed. While the whole species was included in Appendix I since early 1990, as its cousin the Asian elephant Elephas maximus, three populations of countries of southern Africa, Botswana, Namibia and Zimbabwe, were transferred to Appendix II but under a number of specific conditions. The decision entered into force 90 days after the meeting, in accordance with the treaty, i.e. on 18 September 1997.

From that date, although an ordinary inclusion in Appendix II would have allowed Botswana, Namibia and Zimbabwe to export elephant specimens subject to the provisions of CITES, these three countries, because of the specific conditions attached to the transfer, were only authorized to export live animals to appropriate and acceptable destinations (for non-commercial purposes as far as Namibia is concerned). In addition, Zimbabwe may export hides, as well as leather goods and ivory carvings for non-commercial purposes. On 18 March 1999, i.e. 18 months after the entry into force of the decision and if all the conditions established in Decision of the Conference of the Parties to CITES regarding ivory 10.1, also adopted in Harare, have been met, Botswana, Namibia and Zimbabwe will be allowed to export, to Japan only, stockpiled ivory originating from their populations. The total quantities concerned would be of 25.3, 13.8 and 20 tons, respectively.

The conditions to be met before any trade in raw ivory may resume can be summarized as follows: 1) deficiencies in enforcement and control measures, identified by a Panel of Experts before the Harare meeting, have been remedied; 2) the reservations entered by the three countries when the African elephant was transferred to Appendix I in 1990 have been withdrawn; 3) the countries support and commit themselves to international co-operation in law enforcement; 4) mechanisms exist to reinvest trade revenues (from ivory) into elephant conservation; 5) a mechanism has been agreed by the CITES Standing Committee to halt trade and retransfer populations to Appendix I in the event of non-compliance with the conditions or escalation of illegal hunting of elephant and/or trade in elephant products owing to the resumption of trade; 6) precautionary undertakings by the three countries have been implemented; and 7) international systems for reporting and monitoring legal and illegal international trade, and illegal trade and illegal hunting within or between elephant range States, through international databases, have been agreed upon.

The fulfillment of these conditions will have to be verified by the CITES Secretariat, in consultation with the African regional representatives on the Standing Committee (from Burkina Faso, Namibia and the Sudan), their alternates (from South Africa, Tunisia and the United Republic of Tanzania) and other experts as appropriate. Then, the Standing Committee must agree that all the conditions have been met.

Considering the established conditions, it is interesting to note that the three range States concerned, which have sound if not excessive populations of African elephants on their territory, do not have their fate in their hands. Even if they have met all the conditions relevant to them, they might be prevented to resume trade in raw ivory, because others have not been able or did not want to meet the conditions they have also to satisfy. This might concern Japan, the country of destination of the ivory, whose internal controls were not considered totally satisfactory by the Panel of Experts, the Secretariat or the Standing Committee. In addition, after the so-called experimental trade would have taken place, if there is an escalation of illegal hunting of elephants and/or of trade in elephant products owing to the resumption of legal trade, the trade will be stopped and populations might be retransfered to Appendix I.

It is evident that amongst those who were strongly opposed to the decisions made in Harare some, in particular NGOs campaigning for animal rights, either have tried to reverse the decisions (see the letter sent by the Management Authority of Israel to the Chairman of the Standing Committee) or, without waiting the resumption of legal trade in ivory, have spread out and continue to spread out unverified information about alleged cases of poaching and declare them as being a consequence of the Harare decisions. In doing so, they are acting exactly as the CITES Secretariat was afraid of when it recommended in Harare that those who spread stories to indicate that proposals are designed to re-open “free” trade in ivory are acting against the conservation of the African elephant.

View PDF: The graphic in this PDF illustrates a contradiction. Illegality is a menace. Nobody 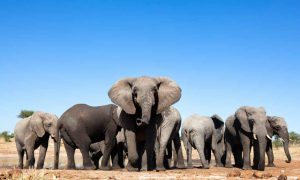 Originally published in The Guardian. Increase in conflict between species and drought prompt sale of

By Kristof Titeca and Patrick Edmond. Originally published in Conservation and Society. Abstract There have

By Michael Eustace. Originally published on Business Day Live. There are at least 400,000 elephants

Will Demand Reduction of Ivory Work for the Conservation of Elephant? [needs an introduction]

Introduction From his workshop in China, the ivory master focuses on the intricacies of his