The inhumanity of the animal rights lobby

If you search Google for Cecil the lion, a 13-year-old big cat (life expectancy 14) killed in 2015 by Walter Palmer, it registers 13, 200, 000 results, containing content generated mostly by the mainstream media and time-rich wealthy woke campaigners which dominate the online world. Do the same search for Ndoskoy Sangau and you’ll get around 250 results, for Sangau Metui you’ll find 269,000 mentions, and for Sanka Saning’o 4’910. That’s a tad short of the 13.2 million relevant responses Google throws up when you type in Cecil the lion.

Unlike the school children, Cecil the lion garnered a Wikipedia page, which tells us how the big cat’s killing ‘resulted in international media attention, caused outrage among animal conservationists, criticism by politicians and celebrities and a strong negative response’. That outrage, I add, was against the hunter who killed the beast legally for a fee that was used to fund future conservation work, especially for lions.

The dogged South African environmental journalist Emmanuel Koro has exposed how animal rights activists persuaded Tanzania’s authorities to relocate killer lions, instead of allowing angry locals to hunt them (see Lions kill 3 children triggering revenge lion-killing feelings from bereaved community). The same mild relocation ‘punishment’ awaits lions in Tanzania that kill cattle. Ironically, it was while searching for lost cattle that the three kids were slaughtered. It seems that Tanzania’s lions get given a freedom pass after eating children, which is disgracefully viewed as being on a par with attacking livestock.

Tanzania’s lions are under the special protection of Western-inspired animal right groups, especially Tanzania People & Wildlife, a sister body of African People & Wildlife, headquartered in Bernardsville, NJ, in the USA. Both bodies are led by Laly Lichtenfeld, a graduate of the University of Richmond, who received her PHD from Yale. This NGO’s morally corrupting influence on Tanzania’s wildlife governance rests on its association with some of the wealthiest institutions in the world, especially in the USA and Switzerland, for whom it is a proxy voice (See its donors’ page). This NGO claims to have a team of 150 people in Tanzania of which 37 are fulltime. A report by CNN described how Tanzania People & Wildlife works proactively to deprive local people of their customs and traditions and to school them in what I call woke lifestyles. (see: Lion-killer Maasai turn wildlife warriors to save old enemy.)

My reading of this evidence is that the mainstream media and animal rights activists are morally warped. They care sincerely about the fate of Cecil, the decrepit Disneyfied lion. But they can’t be bothered to memorialize or to get angry about the three school kids from the same family who were ripped to pieces and eaten by a lion.

Elephants and sharks are also killers

Encyclopedia Britannica estimates that up to 500 people per year are killed by elephants every year. This figure, shocking as it is, is commonly bandied about on the internet as if it constituted a credible fact. But even though concrete evidence is hard to find, I strongly suspect it’s no such thing. Take Sri Lanka. The Hindustan Times reported that the parliamentary Committee on Public Accounts (COPA) Chairman Tissa Vitarana said that in 2019 the number of humans killed by elephants in Sri Lanka was 122. Yet Sri Lanka hosts just 6000 or so of the world’s remaining 600 000 wild elephants.

Revealingly, a BBC report headlined Sri Lanka elephants: ‘Record number’ of deaths in 2019 failed to mention that there’d been a sharp increase in the number of deaths caused by elephants or that anybody had been killed at all. It also omitted to tell its readers that COPA

said that ‘despite 60 years of efforts to resolve the human-elephant conflict, no significant progress had been made’.

Type into Google ‘How many people killed in Southern Africa by elephants’, home to hundreds of thousands of elephants, you will find barely a trace about people killed by elephants. But you will be shown a deluge of information about elephants killed by humans, especially by poachers. This isn’t so much fake news as the distorted manipulative selection of the news in accordance with animal rights dogma.

In punishment for my sins, I scrutinised the 2017 annual report of the NGO Elephant Family: protecting Asian wildlife and its habitat. It informed me on page 22 that in just one state in India, Odisha, since 2004, ‘elephants have trampled over 87,000 acres of ready-to-harvest crops and damaged more than 8,000 homes and killed 600 humans’, compared to 685 elephants killed by humans in the same period. Reading about so many human deaths and so much costly destruction of potential food in a poverty-stricken state, made me want to launch a rival NGO entitled Human Family: protecting people and livelihoods from wildlife conflict.

It isn’t only on land that the animal rights lobby has had a moral bypass. My esteemed colleague Jean François Nativel has been vilified by the world’s animal rights lobby. Merely because he refuses to place the conservation of sharks above the right of people to have free and safe access to the ocean off Reunion. He characterizes the motto of the NGOs at work on his island state as ‘save a shark, sacrifice a human’. Bending to pressure from animal activist NGOs, Reunion outlawed shark mitigation programmes, and closed its waters to swimmers and surfers. Fisherman were also prevented from killing bull sharks, which are more dangerous to mankind than great white sharks. Reunion now leads the world in terms of the number of humans killed by sharks (See this video).

We need a sound moral framework

It is not acceptable for modern humans to allow nature to do its own thing. Human interests must come first. So, if I was asked hypothetically to choose between saving three school children in Tanzania and killing the 16, 000 lions that live there, I wouldn’t hesitate to propose doing away with the latter. Somehow or other, we have to make harsh decisions about the wildlife we are necessarily encroaching upon as our economies develop and our populations grow. Of course, we must manage and influence diminishing habitats humanely. But in pursuit of our own and nature’s best interest we are compelled to interfere with the existence of many species and habitats.

Conservationists must show proper regard to every creature – human or wild – as an individual and/or species as a component in an ecosystem, using a moral framework that is uniquely human. No part of our world is or should be truly wild anymore. If not always under our control, nature is under our management and influence. Nobody ever said that conservation was easy or risk free. Though I do say that the soul-destroying animal rights lobby has betrayed humanity.

How do you read the allegations in the video?

By Dr. Nikolas Sellheim Introduction In a forthcoming peer-reviewed study in the Review of European, Comparative

A People’s Manifesto For The Future Of Conservation

Indigenous, non-indigenous campaigners and experts who attended the world’s first Our Land Our Nature Congress released a 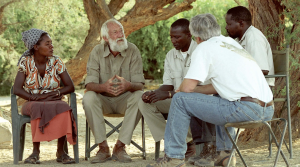 Originally published on Ecology and Society. ABSTRACT Human-wildlife conflicts are a global problem, and are

There are 8 billion people on the planet. Most of them live in cities. IWMC promotes the interests of aboriginal, rural and coastal communities (ARC)